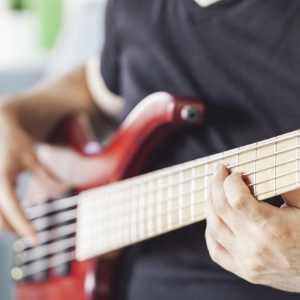 Practicing bass guitar It’s one of the most important things to advance as a musician.

This, you see, is a much more economical way for me to get my decidedly biased opinion out to the greatest amount of people in the least amount of time.
One of the best tips I can give about practicing is that the most important thing to look for when practicing is quality rather than quantity. This may sound like a tired old saw but believe me, nevertheless it is true. I am always skeptical when someone claims that they practice eight or nine hours a day.

Not because I don’t believe them, but rather because I sincerely doubt they are receiving the benefits they are presumably seeking while maintaining such a rigorous practice schedule. I often think the same as I do when I encounter someone who proudly proclaims they have read the Tolkien books umpteen times, and that thought is “Why would you want to do that?” And, you know what? Often, the reason is the same.

They do it so they can tell someone else about it and they hope that by doing so they will impress them.

Now before some of you out there insist on being offended, please let me qualify my position by saying this.

I am not saying no one benefits from extreme amounts of practice; merely that most people do not.

I certainly know that I for one can’t hope to improve for eight or ten hours a day.

This would require hand transplants and divine inspiration, in my case.

And please don’t pester me with “Just because you can’t doesn’t mean we can’t!” I’ve just said you could, haven’t I?

Once you set out to practice, you should have a specific goal in mind. Such as “I want to play this a little more smoothly.” or “I want to be able to do that a little faster.”

Or, it could be “I want to learn scale X backward and forward, all over the neck.” Once you have a firm goal or goals in mind, practice whatever it is you wish to improve, but only do so for as long as it seems to be helping.

When you start doing worse rather than better, switch to practicing bass something else, or stop entirely.

If you stop in time, when you do pick your instrument up the next day, in most cases you will discover you will be able to play whatever you were practicing the day before even better than you could when you were then at your best, but only if you stop in time and don’t practice mistakes. Oh, and “practicing” stuff you already have down pat isn’t really practicing, it’s playing.

You really shouldn’t waste your time this way, unless you are brushing up on something you don’t play as well as you used to.

If you practice bass properly, however, this should never become an issue. If, on the other hand, you don’t have a specific goal for practicing bass, and you feel must play anyway, call it playing, not practicing.

Don’t confuse the two. I can easily believe there are people out there that play for eight or ten hours a day, but do not actually practice for that long. And before you accuse me of splitting hairs, let me put it to you this way, If you were to ask me how to practice, and I said “Oh, just play everything you already know for several hours.” would you think I knew what I was talking about?

Remember, one of the major reasons we practice is to develop muscle memory.

Our nerves and muscles will eventually remember anything we cause them to do repeatedly, and will then do this almost automatically when we ask them to do it again, or sometimes even if we don’t. Accordingly, it is most important we avoid practicing mistakes.

For instance, if you are practicing with speed in mind, trying to start off playing really fast is probably a mistake.

Well, let me rephrase that. Not probably, but definitely. You should start slowly, making sure that your fingers are working with absolute accuracy and precision. Once accuracy is achieved in technique, tempo, dynamics, and of course the notes you are playing, then is the time to step it up a little, tempo-wise. But, do not speed up until all of these are absolutely accurate.

Then, don’t speed it up a lot, just a little. Use a metronome, or better yet a drum machine.

If you don’t have a metronome, buy one, or use the metronome on-site. (You can buy a pretty decent metronome for less than twenty bucks these days) Step up the tempo about 5 bpm at a time.

Once you can play accurately at the faster pace, step it up again, and so on.

However, once you start to get worse every time you try to play the line, stop. Immediately.

You’ve already passed “Go” for the last time, and you sure as hell ain’t gonna collect the 200 bucks. Slowing back down and then building back up to speed may work in the short term, but in my opinion is a waste of time, and may actually undo some of the time you’ve spent building speed.

The same is true for smoothness, dynamics and just about anything else you may be trying to achieve. Remember, this is not a race.

The only yardstick you are working against is your own, and if you try to take shortcuts, it will not help, and the only person you are hurting is you. Do it right in the first place. Turtle, not Hare.

Once you have decided that practicing that particular item is no longer helping, you could then go on to practice something entirely different.

This may work for you, but in my case I often find I am tired, at least mentally, and at this point it would probably be counterproductive for me to work on something else. On the other hand, sometimes after a little break I am refreshed and ready to go again.

Proper technique is absolutely essential to learning to play to your full potential in your electric bass.

The last thing you want to be doing when you are trying to learn something that is difficult for you is to be also fighting against bad habits you’ve picked up along the way, and then have reinforced by practicing them.

Therefore, the first thing you should do when practicing is to make sure you are practicing with good technique.

You should wear your bass properly, (at the same height as it would be if you were sitting with it on your lap) make sure your fretting hand is positioned correctly (thumb at about the middle of the back of the neck or even lower if you have small hands) and with your fretting hand fingers where they belong (four fingers, four frets, wherever you are on the fretboard.

You should fret the strings practically on top of the frets; just far enough on the headstock side of the fret that they don’t rattle) Your plucking hand should be in a relaxed position, with the wrist fairly straight.

If your wrist is bent at a steep angle, raise your elbow to correct this. Do it now!

Poor technique may not seem to get in your way when you are a beginning player, but this is because most things seem hard at this point anyway.

Later on, when you develop better facility and (more importantly) loftier goals, you will probably notice that achieving these goals is more difficult if you have poor technique.

By this time, however, it will probably be too late, unless you are far more dedicated than most. Most people will not spend the time to essentially re-learn how to play after they have been doing it for a number of years.

The irony is that it usually takes a few years before you might notice that your technique is the thing that is impeding you in attaining your goals.

A Good electric bass technique also allows you to play without constantly staring at your hands.

This is important when playing in a band-type situation as it allows you to watch and listen to other players around you.

With good technique you don’t have to be staring at your hands; rather you can be looking around you and listening.

Therefore, you can become the guy that other players love to jam with or hire as a sideman, because you are always paying attention to what is going on around you and playing appropriately rather than apparently having a love affair with your fingers.

If this is perhaps too graphic for you, allow me to say two things:

1) Get your mind out of the gutter, and

2) This is really the way it seems when I’ve hired players for the weekend, and the only way I could apparently get their attention was to go to their side of the stage and kick them.

The other thing about having good technique and not looking at your hands is that you can play some really cool stuff, and it looks as if it is completely effortless.

This may not impress the crowd as much as if you are staring at your hands with an intense look on your face and sweating a lot, but it sure impresses other musicians, and when it gets down to it, who is it more important to impress?

Now let me be quite clear, here. By “impress”, I don’t mean the “Look upon my splendor and despair, mere mortals.”

Now let’s be honest, here. If your only goal is to look cool to the average audience member, all you need do is play the root with enough rhythm so they can dance to it, deport yourself with a good deal of confidence and charisma, and look good.

Oh, and if you sweat a lot and wear your bass really low, this is good as well. Bass Face is almost essential in this scenario.

For those of you who are unfamiliar with the term “Bass Face”, it means all those really weird, intense expressions you see on bass players’ faces when they are really “going for it”, and usually pounding out the root in quarter or eighth notes.

This is not a bad thing, and is really very popular with the non-musicians. If you choose this path, you could easily become famous. Many people have.

I am assuming, however, if you are on this site, it is because you really want to learn how to play. As some of you probably already know, just because someone is a famous player it does not necessarily follow they are a great or even good one.

Becoming a member of a famous band is a question of being in the right place at the right time, and choosing the right bandmates with no way of knowing if this is the right choice at the time.

It also usually involves extreme dedication, although some people just fall into it.

In short, there is no way you can ensure you will be a famous bass player, but by learning good technique, practicing properly and with set goals you can certainly become the best bass player you can potentially be. This is the only advantage you can actually give to yourself in the music game, so why not do it?

Scroll back to top