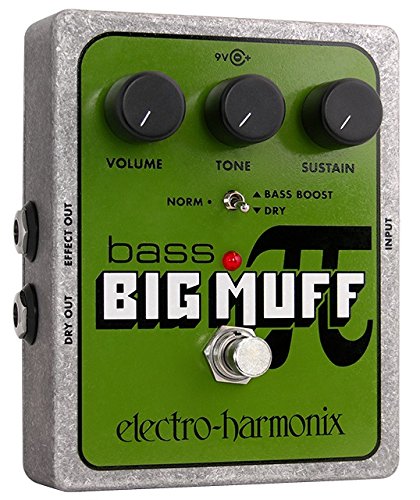 Is the EHX Bass Big Muff the best bass distortion pedal on the market ?

In this post we are going to tell you three things you need to know about this pedal before you buy one.

And we are going to help you decide if the Electro-Harmonix Bass Big Muff is the best bass distortion pedal you can buy.

The first thing you need to know about this pedal, which I think is really great, is the price.

So at the moment on Amazon, this goes for … see price of Bass Big Muff

And as I show you now, for that, you get a huge range of sounds to play with, all through are latively simple interface on the front.

So let’s run through these settings, then.

The first feature we’ve got true bypass , and that’s the first big plus.

The volume, fairly self-explanatory, just turns the effect up or down.

Next to it we’ve got the tone, which is going to affect the kind of brightness, if you like, of the distortion.

So if you turn this all the way off, that sounds quite sort of dull.

But if you turn this up, it becomes more sort of crisp and toppy.

And its got a bit more of a sort of a high end buzz to it.

If you turn this down, we lose the distorted effect.

And if you turn it up, this affects the presence of the distortion.

So these two dials alone give us a massive spectrum of sound to play with.

If I want something that is super heavy, really distorted, I can turn these quite far up.

And  you get a really sort of huge, crunchy, powerful distortion sound.

So this is great for really big, heavy riffs.

Really similar to the sound that Chris Wolstenholme. That’s how you pronounce it  from Muse used on Hysteria.

But if you want to dial these back a little bit, you can actually get a much more subtle kind of distortion out of this, which you could almost describe as a just slightly over driven crunchy sound.

So I’ve got these two sustain and tone turned quite a long wayback to the left now.

Then you can hear, there’s a bit of distortion there, but it’s not really completely destroying the sound.

You’ve got that in your locker and, of course, everything in between as well.

But I’m going to move onto the second important thing you need to know about this pedal, which is it doesn’t completely destroy your bass signal.

A huge problem with bass distortions for ages is that, as soon as you turn the distortion on, you actually lose a lot of the low end, which, of course, for bass players is a huge problem.

So Electro-Harmonix has done a great job, first of all, of actually keeping this distorted and bass.

But if you want to manipulate your low end a little bit more, you can use this switch in the middle here.

So this gives you some great options.

Switch in the Middle

You got norm, which is in the middle, bass boost, which is at the top, and then dry, which is down at the bottom.

The norm setting in the middle will give you just the distortion that’s coming from the pedal, so completely as is.

If you set it back to normal, it’s a bit thinner, doesn’t quite have the weight.

So this is a great tone !

Often found that you didn’t quite have the presence or the low end you wanted, so you just slipped the bass boost on, and everything worked out great.

But one potential problem you get from doing that is you actually lose the sound of your bass.

So if you really like the tone of your bass, you can look at using the third setting, which is dry.

What this does is it actually blends in a bit of the actual sound of your own bass.

So you’re going to get a better tone coming from the bass, a bit of the actual clean sound, blended in with the distortion.

So it’s what you could think about almost as being as a signal blend, soa blend of the distorted signal and of your own bass.

This is our favorite setting, is just much fatter, much rounder.

It’s got much more presence.

So you can really play with this and get a massive range of sound.

If you just want a little bit of crunch, a little bit of overdrive, or a completely distorted-to-hell kind of tone, they’r reall there, all in this very, very, small box.

And you’ve actually got a couple more options for tone along the side.

So you got an effect out and you’ve also got a dry out.

This is an Incredibly bass pedal distorsion !

The third thing we need to tell you about this pedal has some good and some bad, so this is a bit of a mixed point.

You can see at the moment, I’m running this just off a battery that’s inside, so it can power completely off a battery.

Or if you don’t want to use battery power, there’s a socket on the backfor a 9-volt power supply.

So that’s the good side of this.

But if you are looking to use a battery, actually getting the back casin go ff to get a battery inside is a bit of a faff.

You’ve got four screws that you’ve got to undo, take the thing off, replace the battery, put it in, screw them all back on.

So it’s not as accessible as the back of something like a TC Electronic Poly Tune pedal.

But in a weird way, I also see this lack of convenience as a bit of a plus.

First of all, it means that the back is nice and sturdy.

It’s not some cheap plastic, so it’s not going to fall apart.

I mean, you can see this is metal all the way around.

So this isn’t the kind of pedal that’s just going to fall apart after three or four gigs.

And if you think about it, you’re probably not going to leave this on for absolutely every single song of the gig and drain one battery per gig or anything like that.

A battery is going to last you quite a long time.

You probably won’t even have to change it that often.

But if you are worried about spending loads of money on batteries, I would just get a power supplier.

Finally  when you look at the price, the amount of sounds you can get from this pedal, its durability, the fact that it’s pretty small and quite portable, I think this is the best bass distortion pedal you can buy.

So do you agree or do you think we’ve got it wrong ?
Leave us a comment and let us know.

But the very last thing you need to hear from this bass distorsion pedal is actually hear this in your own band.

If you found it useful, make sure to comment