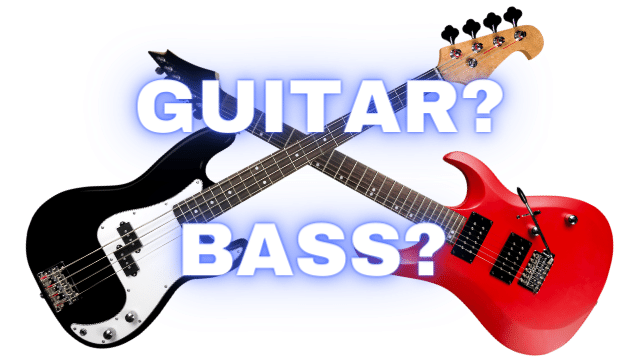 Many people who want to learn to play a stringed instrument are torn between the guitar and the bass. And that question of “What are the differences between a guitar and an electric bass” is very common. Future Bassist, the answer is not “the Bass is a 4 string guitar”.

Bass guitar and electric guitar are stringed instruments that are very similar. After all one is designed with reference to the other. But no, they are definitely not the same.
Although many people often confuse them when they see them on stage, the only similarity between them is the visual appearance .
Yes, they also seem to play the same, but there are big differences between one and the other that you should know if you have not yet decided for one, and believe us, the electric bass will seem more interesting to you.
As we have just seen, the shape, appearance and construction of the bass guitar is very similar to the electric guitar. Although due to its function, and the need to generate a very deep sound, its dimensions are bigger.
That is to say, they are very similar and alike instruments. But despite being the two most popular stringed instruments, hanging, and many confuse them on stage, there is a big border between one and the other.
They are tuned the same, played the same, amplified the same way, and look the same. But they are not.
The differences between the electric bass and the electric guitar, are:

✅1. The size of the instrument

✅2. the number of strings

Visually, the clearest difference between a bass guitar and a guitar is undoubtedly the number of strings each one has.
The most common is that the electric bass has 4 strings, while the guitar usually has 6 strings.
This difference can be appreciated by counting the number of pins of each instrument. Although being rigorous this can be very relative.
While it is true that it is normal to see electric basses with 4 strings, it can have more depending on the type or model of bass.

And you, do you want to know how many strings a bass guitar can have? In this article about the number of strings of the bass guitar we tell you everything.

In line with the previous point, the strings of the electric bass are also much thicker than those of the guitar.
The thicker a string is the more it will affect its vibration, and therefore the bass sound.
This is why there are so many differences between a bass string and a guitar string (it is common for many guitarists to find it very difficult to play bass because of this).

The fourth difference, derived from all the previous ones, is, of course, the sound of each one.
The electric bass is derived from the double bass, so it was built to have a sound an octave lower (or lower) than other instruments such as the guitar.
So it is easily recognizable as an instrument that generates full-bodied bass notes.
And this is achieved by giving the instrument a longer neck, and thicker strings (among other things, of course…).

Finally, we have to pay attention to the functional difference between the guitar and the bass. That is to say, what each one is used for.
In this sense, the relative difference between a bass guitar and an electric guitar is the rhythmic and melodic role that each plays in the music.
The guitar is usually the main melodic instrument, and perhaps the most used to accompany the vocalist of a band. While the electric bass is in charge of marking the base and serving as musical support for the whole band.
But this is not always the case, since it is common that the melody and structure of the voice corresponds to the bass line.
Moreover, in genres such as jazz, funk, or R&B, the string instrument with the greatest prominence may well be the electric bass. Both in its rhythmic and melodic function.

Do you want to know more about the role of the bass in music? Here we tell you the functions of the bass as a fundamental instrument in modern music.

There are many who search on the Internet the difference between these two string instruments .
And is that, when someone wants to learn to play an instrument , the best known and most common are the guitar and bass . And that’s when the famous question arises:
Is it better to play the bass or the guitar?
Many decide to play the guitar because it seems more fun, since the bass seems to be an easy and boring instrument.
And the fact is, the guitar is much more attractive given its leading role in most musical styles.
But the bass is an instrument that the more you get to know it, the more you like it. It doesn’t give everything on the first date, and without it, nothing in music would make sense.
Are we saying that the bass is better than the guitar? Of course not.
Each one has its particular characteristics, its advantages and disadvantages. Although for us the bass is a deep instrument full of feeling.
However, after reading the differences between one instrument and the other, only you can draw your own conclusions.

If you want to know more about how fascinating it is to play the bass, take a look at our recommendations on why learn to play the bass. Surely this will help you to solve your doubts to know if the electric bass is for you.