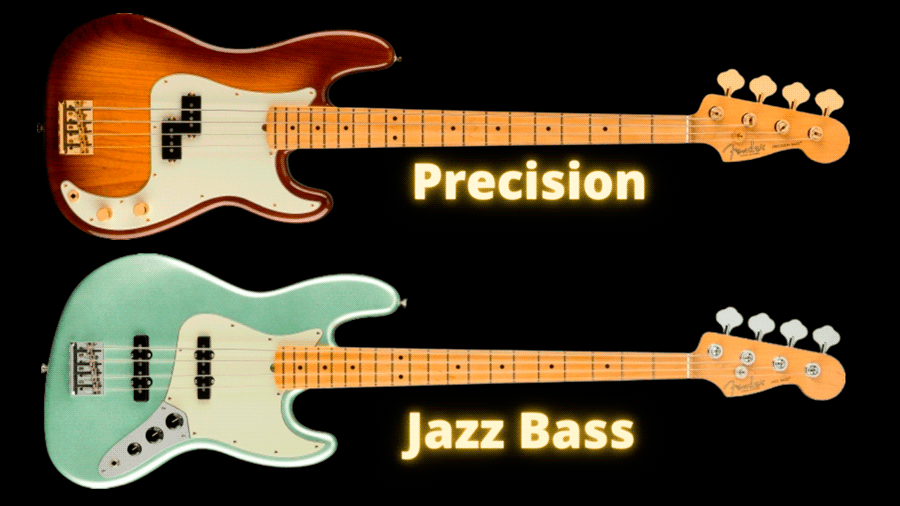 One of the biggest dilemmas when choosing a Fender bass (or many other brands) is deciding between one of the two most common types: Jazz and Precision bass. Especially if you have few resources and you want to choose very well which bass to buy.

Well, if you are at that point where, no matter how hard you look, you don’t see too many differences between Fender Jazz and Precision bass basses, this is the article for you.
So, in the style of the “find the differences” game, we analyze in detail all the features that distinguish these electric basses, and compare the pros and cons of each one to know when to choose one or the other.

The basses Jazz bass and Precision bass are terms of reference for countless electric bass models that are not Fender branded. And that’s why, today, one comes to the dazzling conclusion that:

Most of the low-end electric basses, cheap, economical, low-cost, whatever you prefer to call them, and others not so cheap, are basses that are manufactured based on these two models: the Fender Jazz bass (J-bass), and the Precision bass (P-bass).

So, why is it important that as bass players we know the differences between the Jazz bass and the Precision bass? or Fender jazz bass vs Precision specs?
Talking about these models is talking about the history of the electric bass, its origins and evolution.
Second, because practically all of us are going to start with an instrument that “imitates” one of these two models. Besides, it is quite likely that, when you consider buying a mid-high end bass, you have a Fender, or a Jazz or Precision bass of another brand on the horizon.

As we have said, it is inevitable that we come across the words Jazz and Precision. And it is inevitable that, sooner or later, we ask ourselves: what are the differences between the two ?
If you look at them and listen to them, but you can’t find any good reason to distinguish between them, don’t worry.
This has happened to all of us, until someone has explained part by part all the differences in design , construction and sound configuration , that exist between the electric bass models with more history. Don’t forget to check the parts of an electric bass!.

One of the differential characteristics between the Jazz and Precision bass, is that the first model, being intended to be a bass with which to play faster, has a thinner neck .
Of course, the neck gets wider as it gets closer to the body, so when we say neck width, we are referring to the thickness of the nut.
Thus, while the Precision bass has a width of 43mm , the Jazz bass is 38mm wide , being quite a bit thinner.

The body of a Precision or P bass has a more rounded and symmetrical shape at its lower end. And, similarly, the shape of the “horns” (what is called double cutaway design) is also more rounded and ergonomic .
However, the body of a Jazz or J bass has a much more pronounced contour at its ends, which makes it have an asymmetrical shape in the lower area, and a somewhat more elongated double cutaway as well.

That is, its shape had a straight cut, and it was accompanied by a perpendicular metal plate for the knobs.

However, the characteristic pickguard of the P bass is the current one. Its shape is adapted to the contour of the body and ends in a rounded tip. Therefore, on a P bass, the pickguard surrounds the pickups, the knobs, and the connector, which is located at the end of the pickguard.

However, the pickguard of the Jazz bass , although very similar to the P bass, has never changed in design and is smaller.

This is because it is cut in the middle of the body, just where the metal plate that holds the knobs and the connector starts. So the pickguard only surrounds one of the two pickups.
The aesthetic difference between the two pickups influences the position of the jack plug. While on a P bass it is very close to the bridge, on a J bass it is further away, near the lower profile of the body.

The first Fender Precision bass from 1951 had a single coil pickup, or in other words, a single coil pickup.
But like other important modifications of the P bass, in 1957 this aspect was also changed. And since then, the double coil pickups called Split coil, so characteristic of this model, were included.
These pickups consist of four magnetic poles each (two for each string). And they are placed together, one slightly offset from the other, at an intermediate distance between the neck and the bridge.
Jazz basses, on the other hand, have two single coil pickups from the beginning, with eight magnetic poles each.
These elongated and narrow-looking pickups are positioned in parallel: one more centered and closer to the neck, and the other closer to the neck. This is what allows the Jazz bass to have a greater variety of tones, depending on where the strings are played.

5. What year were they built?

To begin with, we are forced to start differentiating these two basses from their year of creation .
The Fender Precision bass , created in 1951 by Leo Fender, was not the first electric bass in history, but the first to succeed in the market. And, therefore, the first model of the two that concern us in this article.
Its name, Precision , is due to the fact that this instrument was a reduced, amplified and fretted adaptation of the double bass. This allowed musicians to play the bass more easily , and to play notes with a precise tuning , clearer and brighter (as on the guitar).
For its part, the Fender Jazz bass was introduced almost a decade after its brother, in 1960 . And it was made as an electric bass intended to offer greater versatility to bassists.
This is because: while the first Precision was inspired by the famous Fender Telecaster electric guitar, the Jazz bass was the bass adaptation of the Jazzmaster guitar.
That is, a high-end instrument intended for Jazz bass players with an advanced playing technique , which allowed to achieve a richer sound in mid and high tones. But at the same time, it also offered greater control in its configuration.

One of the main differences between these two electric basses is the final sound.
We already know that the final sound in a bassist, in a 50%, is determined by his particular way of playing.
Even so in these two basses there are clear differences in the sound, due to what we have explained above, among them, we can observe that they have different sound control options.
Maybe the Fender Jazz Bass can be a more versatile electric bass because it has two pickups.
But as in everything, the final decision is up to you, and that’s why you have to watch this video where you can compare the sound produced by both electric basses.

Musicians who use precision vs jazz bass

Artists who use Precision bass

Artists who use Jazz bass